What you need to know about DHT and Hair Loss is the connection between them. The testosterone and baldness are linked together. For understanding, testosterone should be defined first. It is a  sex hormone present in males and females. It has various characteristics in the development of the human body. Here we have mentioned a number of purposes for which this sex hormone is needed. These purposes include the development of certain secondary sexual characteristics in men, growth of hairs and change of men’s voice. Few basic abnormalities can be caused by the deficiency of this hormone. As very low or high levels of this hormone can lead to the result in baldness. But here the question arises, is it only this hormone that causes the baldness or there is something else? What you need to know about DHT and Hair Loss can be best understood by the reasons behind it and; we have to cover the research behind it and the basic connection between this hormone and baldness.

What you need to know about DHT and Hair Loss is a serious talk among people and a most searched one on the internet. Many researches have been done on the function of this hormone and its connection with baldness. Few researchers say that this hormone in high levels can result in baldness due to a specific hormone that it produces. This hormone exists in the following forms in the body. These forms should be discussed. First form of this hormone is in its free state. This kind is not bound to any proteins in the human body. This Free form is directly connected with the hormones’ receptors and is absorbed by the cells to carry out various important functions. The second most important kind is DHT. Dihydrotestosterone is the abbreviation of Dihydro-testosterone. This is made by an enzyme which is called 5-alpha reductase and DHEA. DHEA is more common in women. This hormone is present in the skin, follicles and prostate. It binds itself to the follicles that cause them to become smaller in size. It then leads to the thinning of your hair and eventually losing these strands and the strength of follicles. 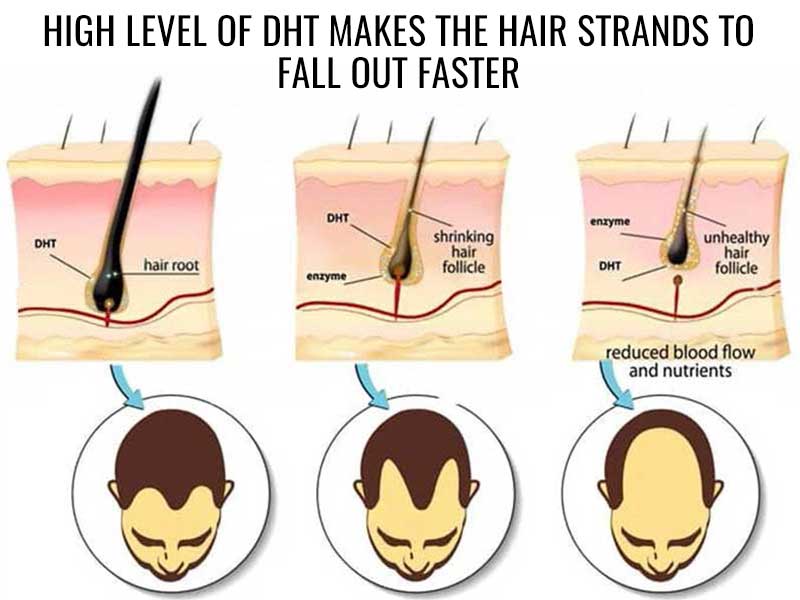 What you need to know about DHT and Hair Loss is that Dihydrotestosterone has many advantages and before the baldness treatment and surgeries, doctors explain their patients regarding them. This hormone and specially its kind that is mentioned already, Dihydrotestosterone mainly contribute to the development of secondary sexual characteristics in men. These characteristics are changes in voice, increasing follicles on the body, sperm production, growth of the testicles. Now, the question arises about the high level of this hormone and also about the low level. Is the high level of this hormone cause problems or low levels of this hormone too? The hairs on the human body grows via follicles. These follicles are the tiny pores beneath the human skin that has a strand of them. These human strands have a growth cycle of almost two to five years. After this cycle, these strands reach a resting state and fall out. These high levels of androgens in the human body grow a hormone, mentioned before, Dihydrotestosterone. Dihydrotestosterone Binds with the certain proteins in the body, which in turn reduces the size of our hair follicles. It may result in thinning of the follicles and may even interrupt the growth of new follicles strands.

What you need to know about DHT and Hair Loss make the patient more curious about their future looks. These both low and high levels of hormone can lead to baldness. These low testosterone levels may also have the similar amount of DHT that contributes to baldness. It has been noted that the men with male pattern baldness have low hormone levels with the average DHT levels in their body. Many people have the similar amount of Dihydrotestosterone as others have but the difference is that their follicles are genetically programmed to be more sensitive to DHT. This thing makes their follicles more liable to reducing in size and strength. The best transplant is FUE and almost all the doctors worldwide recommend it to their patients after prescribing them medical treatment as a foremost approach. It is being done all around the world and many people are enjoying its beneficial results.

Can DHT hair loss be reversed?

Yes there are some hair fall control treatments which lower the level or stop conversion of testosterone into DHT. One DHT conversion is slow down; one can see thicker, healthier and thicker hair.

What foods can reduce DHT in the scalp?

Foods that contain Lycopene can control the DHT level. Watermelon, mangoes, tomatoes and carrots have the ability to reduce the level of DHT in the scalp. Similarly legumes, Soybeans, Pumpkin seeds, black pepper and Sesame seeds can lower the DHT level.

Is there any hair loss treatment in Lahore Pakistan?

Yes there are different kinds of medicine and treatments depending upon the nature and severity of the hair fall. The first line of action is to stop active hair fall and the second line is to regrow lost hair.

How to get an appointment for hair loss evaluation in Lahore Pakistan from a specialist?